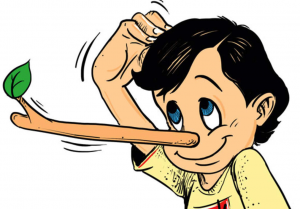 Everyone lies. We do it for a lot of reasons. We sometimes do it to protect ourselves as well as others from embarrassment or hurt feelings. When your cherished grandmother asks you whether you like her famous family-recipe rhubarb pie, and you really don’t, you likely say you do as you struggle with the second helping. You may even tell her it’s delicious. You lie because you are a nice person. Of course, some do it for more nefarious or dishonest purposes.

Lying is one of the necessary building blocks of human existence. We have to lie, as well as trust, in order to survive. An inability to do so places us at a distinct social disadvantage. We are programmed at birth to assume that what we are told is true and that what we see is real. Psychologists call this our innate truth bias. Infants learn to lie before they can walk. In general, we lie for one of two reasons: either to advance our interests and “score points” or to avoid conflict.

The art of detecting lies as well as learning how to lie without being caught and maintaining our integrity in the process are essential life skills. I’ve taught them over the course of five decades to police officers, senior military personnel, professionals of every stripe and business leaders. It’s a foundational element in one’s negotiating survival arsenal. Without this critical knowledge, we will repeatedly become the unwitting victims of those who seek advantage at our expense.

There’s a mountain of compelling evidence that suggests the average person is lied to close to 200 times a day. About 5% of these are called “white lies.” A recent University of Toronto study of its alumni found that 55% of people said they lied weekly, if not daily, and 84% did so at least monthly. Less than 10% said they never lie. So they say. But, after studying this topic in depth for more than 50 years, I’m doubtful. The reasons given by the respondents included circumventing a disagreement, proving a point, getting out of doing something, or to not wanting to reveal private information about themselves. Might these be among the reasons you lie?

Almost half of all resumes contain false information or fabrications to secure a competitive edge. Apparently, 83% of university graduates lie in an attempt to secure their first job – largely because, as they say and believe, “everyone does it.” Half of workers today admit to engaging in unethical or illegal behaviours and a 2018 Ernst & Young study found more than half of CEO’s would lie to secure new business. Immoral behaviour among business leaders is now the norm rather than the exception. People in power find it easy to lie. Power lowers the stress hormone cortisol, enhances cognitive function and can make unscrupulous people feel they’re immune to guilt. (Although tempting, let’s leave the reigning incumbent in The White House out of this conversation.)

The average adult can distinguish truth from falsehood 54% of the time. And the more confident we think we are in our ability to detect lies, the worse we are at it. The reason is that, while human behaviour is generally predictable, the clues to detecting fraudulence don’t always apply in specific individual circumstances. For example, liars tend to smile less, regardless of culture. But never assume body language alone is an iron-clad barometer of correctly interpreting emotional responses. Likewise, lower body movements and eye blinking often increase when people lie. Studies also suggest women are generally better liars than men and also tell more complicated lies.

Be mindful of the caveat however. Without a knowledge of the baseline (normal) behaviour, everything is just guesswork. You cannot, for example, read the baseline of a drunk person. Since the supporting research on this topic is vast and the subject of credible empirical studies, it can provide distinct competitive advantages. But it can also lead to wrong-headed conclusions. While lie detection is more science than art, it’s not foolproof. A lie requires the intent to deceive; otherwise it’s simply an honest mistake. Purposeful lying is hard work, which is why the clues to deceit can be identified – provided you know where to look.

Although more than 75% of lies go undetected, with study, you can double your lie detection capability. How? First, turn on your radar: ask yourself what they might have to gain by lying to you. Pay attention to exactly what is said and not said – resist the urge to make assumptions about missing information. When you don’t know, ask open-ended questions to collect additional facts and context. The more information you have, the easier it is to drill down for the inconsistencies. Look for micro-expressions (subtle, instantaneous gestures) and verbal discrepancies that deviate from their normal responses. Recognize meta-talk – superfluous words aimed at evasion, deflection or outright fraudulence.

Look for split-second flashes of emotion or contradictory facial expressions as clues to their true feelings. Watch for asymmetry both within gestures and between gestures and words. Your brain detects these micro-signals better than your eyes and ears – so, when in doubt, listen to your gut. Look for gesture clusters; single cues or slips may be meaningless. Liars tend to rehearse their words, not their non-verbal responses, and they limit their baseline body language movements when fabricating falsehoods.

The eyes reveals lies. Whenever we access information either stored or constructed in our memories, the eyes instinctively move – in simple terms, our optic nerves are “wired” to the part of the brain which controls the visual, auditory or kinesthetic information sought. Eyes that remain unfocused or unmoving tend to indicate more truthful visual accessing. Another caution: this is a complicated topic that should be illustrated to be fully understood.

Many who lie in their negotiations report feeling little or no guilt because they see it as simply “part of the process,” especially when they have been lied to in the past. Studies reveal that the larger the potential incentive at stake, the more likely people are to lie as well as expect others to lie. That’s not rocket science – people lie more often when they believe they have significant losses at stake.

The more untrustworthy your reputation or your appearance, the more likely you will be lied to. Negotiators who are directly informed they are expected to tell the truth (or that their version of the facts will be checked) behave more honestly. Lies of omission or concealment are more common than deliberate falsification – in one study, 100% of the negotiators participating lied about a contentious issue when no one directly asked them about it.

More on this topic in a future blog – the gender and cultural differences in how people lie, how to negotiate with a liar, and how to answer (without lying) when you feel you cannot be truthful. This is a big topic and some tell me my blogs can be too long (they likely aren’t lying) and occasionally a bit overwhelming. So there may be several parts to this dialogue. Please let me know if you want more on this topic and I will oblige.