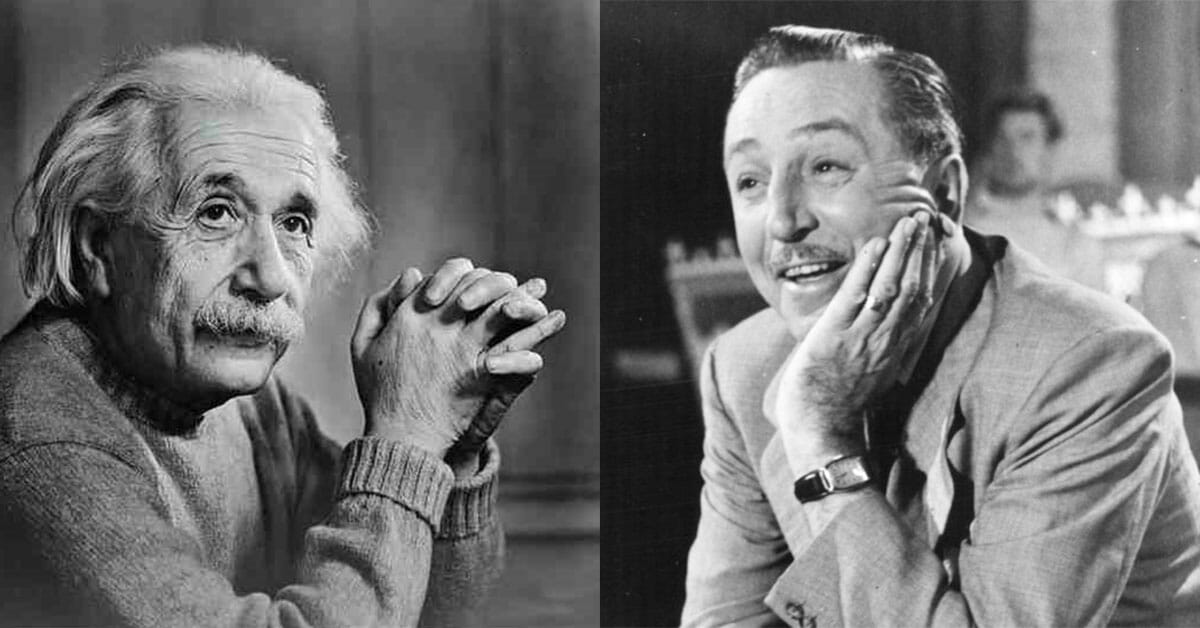 I have several heroes whose lives I have studied in depth and whose thinking gives me inspiration and guidance. Among them, for different reasons, are Albert Einstein and Walt Disney. What intrigues and informs me about their remarkable accomplishments is how they each, in their own unique way, approached and solved the problems and addressed the aspirations of humankind.

Einstein (1879-1955) is likely best known for his groundbreaking theory of relativity. His discoveries and contributions to theoretical physics are unparalleled in the scientific community. His uncanny ability to question the authoritative beliefs of his time and develop radical alternative models of thinking in the face of his opponents and defenders of existing dogma are awe inspiring. As was his humanity and efforts to overcome personal hardships, which are entirely different topics.

Perhaps few know that Einstein was incapable of speaking until he was almost five years of age. He was considered “mentally slow” by his teachers. This, on its own merits, doesn’t make him extraordinary – many accomplished and brilliant souls had similar halting starts. In fact, most geniuses do. The takeaway is this: How we start is not necessarily how we end. This too is testimony to unraveling the magic of the creative process.

James Watt, a Scottish inventor whose accomplishments were instrumental in driving the Industrial Revolution, was declared dull and inept in his youth. Abraham Lincoln had the equivalent of three months of formal education. Thomas Edison was asked to leave school at the age of nine because he was at the bottom of his class. The poets Poe and Shelly and the painter James Whistler were all expelled from school. (Perhaps my affinity for these geniuses is that I too was expelled from school … a few times.)

Howard Gardner, in his brilliant work on Leading Minds: An Anatomy of Leadership, identified how many of our greatest leaders lost their fathers at an early age and how that catapulted them to the successes they eventually achieved. Aside from character, adversity fuels an insatiable curiosity that results in personal growth, inventiveness and insatiable curiosity. Mary Tyler Moore said “You can’t be brave if you’ve only had wonderful things happen to you.” Innovative minds are spawned with an ingrained dissatisfaction with the status quo.

When we think of Einstein, we imagine him surrounded by complex equations beyond the comprehension of just about everyone. Yet Einstein’s creativity had its roots in his imagination, not math. He called them thought experiments. Imagination is the brain’s navigation system: it orchestrates our internal data with our external experiences. Einstein thought in pictures, not in words or formulas. Once his visual images overwhelmed the mental barriers to insight and discovery, he converted them into symbols. Scientific breakthroughs followed. Einstein’s genius lay in his ability to visualize. And such is the genius that lies within all of us.

Walt Disney (1901-1966) possessed an inventiveness many consider second to none. He said “If you cannot conceive it, you cannot achieve it.” He not only entertained the world, he created an entirely different genre of film making and established a successful, sustainable business model much emulated by others. Yet, like Einstein, few likely know that he was fired from his first job as a cartoonist because, in the words of his termination letter, he “had no imagination.”

Years ago, I had the great pleasure of meeting Edward de Bono, one of the world’s most creative minds. A Maltese physician and, like Edison, among a pantheon of the greatest marketers who ever lived, de Bono is credited with several different problem-solving techniques. One is known as six thinking hats. That said, we all stand on the shoulders of those who come before us – Disney preceded de Bono’s thinking discipline by deliberately employing three hats in his creative thinking process. These he “wore” in iterative fashion as he made his way through the maze of obstacles he wanted to overcome.

The first hat was that of a dreamer: this was the initial phase of his fantasizing. Without judgement, he allowed random thoughts and absurd combinations of novel ideas to flourish in his fertile mind. His early conceptions were richly prolific, full of colour, sounds and feelings. Then he would put on the realist hat to pragmatically assess his initial impressions and conclusions. He sought to test their feasibility in the real world of potential discerning investors and his customers. Lastly, he assumed the role of critic: to rigorously evaluate his usually amazing concepts against a pre-determined set of criteria – to refine and improve them for the purpose of implementation. Without execution, innovation doesn’t happen.

The brain is filled with idea spaces. Dreaming puts us into the “want to” space – what we want to see happen. The realist thinks in the “how to” space. This focuses her on implementation. The critic role is where all difficult questions invariably lead us back into the dream space. Because life isn’t simple, innovation is a continuous iterative, symbiotic, relentless cycle of asking, conceptualizing and rethinking.

Einstein and Disney brought different disciplines to the creative process. Both were dreamers in their alternate ways of visualizing what could be. They conceived multiple possibilities by using a creative thinking technique known as reframing – seeing challenges from opposing angles and contrarian perspectives. Although anyone is capable of emulating this approach, too often we let the external critics dominate our efforts and put a stop to our curious imagining of what could be.

My kinship with Disney dates to my teenage years. A cherished quote of his is this: All our dreams can come true if we have the courage to pursue them. His definition of courage was less about bravery than it was about having a quality of mind that enables us to confront opposition with calm focus and resolve. Likewise, for me, courage is no more than the ability to get up every day and try harder to be better than the day before.

Walter Isaacson wrote what some consider the definitive biography of Steve Jobs. In it, he claimed Jobs was the ultimate icon of sustained innovation. This is recency bias. Walt did it fifty years earlier than Steve and over a longer period of time. Disney’s biographer, Neal Gabler, put it this way: “he built a company where leaps of imagination were combined with remarkable feats of engineering.” While both reinvented their industries in spectacular fashion, their thinking styles, like that of Einstein and others, were remarkably different. And I find them all quite edifying.