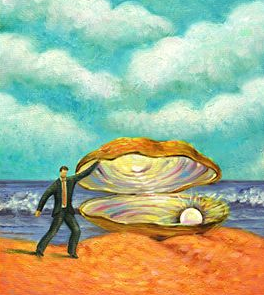 Oysters are the silent, non-responsive players in the game of life. I chose the label for an obvious reason: when we know how to expertly open them up without damaging their fragile egos, we may discover a pearl and the kind of communication that could lead to more productive encounters in future. For this to occur, as with every game people play, we need an arsenal of proven tactics that enables us to draw them out of their protective silence in a way that strengthens and harmonizes the relationship.

Oysters are generally passive folks who clam up when confronted with what they perceive as disagreement with their interests, whether real or imagined. Their silence typically results from shyness or a desire to evade what they view as a potentially invasive occurrence. For some, however, it’s a form of calculated aggression. Figuring out which it could be isn’t always easy. Since invariably we have a couple of them in our lives, sometimes people who matter, it’s important to know how to open them up without breaking their defensive armour.

Oysters have an ingrained behavioural proclivity to react to suspected probes into their privacy by shutting down and responding with blank stares. They see enquiries as intrusions on their rights and values. No matter how harmless or innocuous our questions may be, most are viewed as possible assaults on their personal beliefs. They either won’t or can’t respond to candid interrogatories, regardless of how legitimate they may be. So, to the inquisitor, they appear to be going out of their way to avoid direct, important or sensitive questions.

Despite our usually sincere attempts to crack open their shells, an Oyster’s success in saying nothing or withholding useful information is generally reinforced by our clueless efforts. In consequence, we’re frequently defeated in our well-meaning intentions by our own annoyance and agitation. Unknowingly, we let them off the hook by talking rather than waiting, by asking even more pointed questions, by openly displaying our exasperation, by answering for them or simply by giving up.

These unmindful responses signal victory to the Oyster and serve to reinforce the behaviour that frustrates us. It is we, through our lack of patience and ill-considered responses, who help them evade the need to respond in more constructive ways. Inadvertently, we ingrain the very pathology we seek to change. Such is the case with many players who’ve perfected the art of insensitive, obnoxious or incredibly frustrating behaviours. It’s one reason we call them difficult people.

The object of this game is to not let them escape. When that happens, they win and the annoying behaviour is reinforced. They’ve learned from prior encounters the odds are great we’ll either do all the talking or, better still, just go away and leave them alone. Every time we fulfill that expectation, we reward their silence. In frustration, we may plead: “Don’t you have anything to say about this?” To which they meekly and submissively respond: “Not really. Can I go now?” They prevail because their oblique response stresses us, not them. Opening Oysters requires some special tactics. Here they are.

Use open-ended questions. Don’t say “Do you like this?” Rather, “How do you feel about this?” will prove more effective. Instead of getting one of only two possible responses (yes or no), either of which only freezes the conversation where it stands and puts the onus back on us, open-ended questions create the potential for receiving better, more meaningful information and thus the basis for a more relevant and productive dialogue.

When confronted with an unresponsive stare, discover the benefits of likewise communicating non-verbally. Strategic silence puts the pressure back on them. A silent look of expectancy that conveys anticipation they’re about to answer speaks volumes. Holding an open hand out to them powerfully says “give me something … please, fill it.” Since you’re communicating, albeit not talking, you’ve effectively relieved your tension while increasing theirs.

Comment on what’s not happening: “You’re not giving me your thoughts on this, Mei ….” Once again, you’re communicating but not letting her off the hook. Alternatively, say something about their distress: “I can see you’re having a bit of a problem with this, Nigel.” Await their response with supportive non-verbal gestures. Should you feel the need to ease the stress, try a less direct query to keep the dialogue going – something like “Have you seen Paul today?” The objective is simply to get them talking (about anything).

Prying open Oysters takes time. Their best defence is our impatience. Counter this manoeuvre by setting yourself a time limit. Most of us give up within the first few minutes of trying. But if you know you’re going to be there for say twenty minutes, and if you use charm, tact and creativity, you’re less likely to become frustrated. Remember, you’re just playing a game. Put the pressure where it belongs. After ten minutes, a quick glance at your watch will remind you that you’ve still got another ten to go. If it’s important to change the relationship, it’s worth the extra time.

If you deal with Oysters regularly, you likely know some of their favourite expressions: like “Nothing” or “I don’t know.” The best counters to such annoying replies are non-directive responses – an eloquent grunt like “uh huh” – or a supportive non-verbal signal (a look of concern) or a prompt for more information, such as “What else?” or “Anything more?” Playful responses like these keep the duress on them and encourage behavioural change while relieving our anxiety. These are not the tactics to which they are accustomed. Never raise your voice. Don’t defeat yourself. Nothing will make an Oyster clam up more quickly than the perception of a possible conflict.

So, what happens when they finally do open up? Prepare yourself. This game isn’t over. When they finally do speak, it’s likely they won’t want to discuss your agenda items. They’ll be somewhat off message and oblique. Don’t interject with: “That’s not what we’re talking about, Sue!” Your ego is getting in the way of the objective and you’ll find yourself back at square one. The primary purpose is to change the troublesome behaviour – just get them to talk – not necessarily to talk about your issues. That’s the next step in your game plan.

Oysters need to be assured a conversation about difficult matters is not a threatening experience and that their typical unresponsiveness doesn’t work on you. When they finally do open up, let them talk about other things. Gamesmanship is about advancing towards the goal line; it’s not about a perfect performance. When our best efforts fail, all is not lost. Persistent players prevail. Remind them it’s not over: you’ll want to meet again to discuss the issue at hand. Make another appointment and set aside sufficient time for round two.