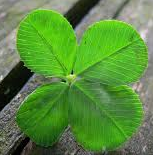 Luck happens.  Just as the reverse is true. Unexpected and unpredictable occurrences we had nothing to do with can be both good and bad. The trick is to know what to do when the good appears and it’s consequential. At least half of smart leadership (or anything else for that matter) is knowing how to recognize it, act on it and leverage it. A popular saying tells us we must “make our own luck.” This suggests we may be able to increase the odds of good fortunes if only we understand how to do that.

Spoiler Alert:  I’m not an advocate of luck. I believe the good things that come our way are the product of deliberate design and effort, independent thinking, creativity and perseverance. I also think bad luck can eventually turn into good luck, as in adversity builds character. The bottom line: it’s not the cards we’re dealt but what we make of them and then how we choose to play the hand we’re given. That said, I suspect most of my readers are seeking insights on “how to” more so than discouragement on matters that may interest them. So, my advice on how to increase your chances of achieving good fortune follows.

Our mindset about life pushes us to either recognize opportunities or ignore them. The lucky see their circumstances for what they are, not what they could have been. They know that sometimes not getting what we desire is a stroke of good fortune and that sometimes getting what we want means not putting in the effort needed to secure it. They handle adversity differently – they look for the silver linings in their ill fortune, don’t dwell on the past and have few regrets. They seek out new experiences, try new things and act on their hunches. They are flexible, observant and optimistic.

So maybe luck isn’t entirely a matter of chance. Some clearly have more luck than others. And some suffer greater hardships and repeated setbacks. I count both among my close acquaintances. And I’ve come to understand the differences in why this likely occurs. There are also some who believe luck is the driving force if not the secret of success – these are often the ones who buy lottery tickets (but that, I feel, is a different topic for another time.)

Seneca told us luck is what happens when preparation meets opportunity. I prefer the word “skill” instead of preparation. For starters, to increase the chances of serendipity occurring in our lives we need to know what specific attitudes distinguish the lucky from the unlucky. Then we must nurture them. Because our attitudes drive our actions and luck is more about our attitudes than the probability of it happening. The thesis of my argument is this: with the right behaviours, luck may more likely come our way.

The principal attribute of those blessed with frequent good fortune is extreme curiosity. The naturally inquisitive open themselves up to meeting others, seeking new experiences, listening to new ideas and trying new things. They ask a lot of questions, especially the kind that never occur to uncreative folks. They deliberately and tenaciously expand their horizons to investigate what they don’t know. They embrace the unknown. Intellectual curiosity fuels their willingness to take risks and to see the value of failure in their learning. This is the difference between the average and the extraordinary. And this too is the difference between the lucky and the unlucky.

Richard Wiseman, a British psychologist who wrote The Luck Factor, conducted an experiment almost thirty years ago that involved two groups of subjects – one were self-described as “extremely lucky” and the other as “extremely unlucky.” He gave the individuals in each group the same newspaper and asked them to count the number of photographs that appeared on the pages. Those who declared they were unlucky took about two minutes to complete the task; the lucky took only a few seconds. Why?

The second page of each newspaper contained a half-page ad that said in two-inch type: “STOP COUNTING. THERE ARE 43 PHOTOGRAPHS IN THIS NEWSPAPER.” The message was right next to a photo, so they were all looking in that same general area. The lucky saw it; the unlucky didn’t. A few pages later, there was yet another large advertisement that said, “Stop counting – Tell the experimenter you’ve seen this and win £150” (about $260.). In order to be lucky, you must be sufficiently curious to want to pay attention to what’s around you. That’s where you find opportunities. If you can’t see them for what they are, you can’t seize them.

The lucky have relentlessly enquiring minds. They invite and welcome things that don’t fit the accepted or traditional way of doing things. They eschew what others see as normal or routine. They’re receptive to novel experiences, information and wisdom from any and all sources in an effort to further their understanding of our volatile, ambiguous and unpredictable world. Because opportunities (and insights) are everywhere. Ripe for the picking and often low hanging.

The second trait required for inviting luck into your life is optimism. A positive attitude not only makes us more interesting to be around but more willing to share our ideas. It enables us to see the positives in others, in events and in everyday challenging situations. We cannot be receptive to the upside possibilities inherent in our circumstances while being negative or downcast. A cheerful attitude liberates us, indeed prompts us, to see the good before we envision the worst.

Lastly, humility makes us more accessible, admired and attractive to others. We’re not drawn to arrogance, conceit or close-mindedness. We’re enticed by authenticity. Our humbleness encourages others to share their thoughts, connections and opportunities for advancement. Our expressions of not knowing something fuels the perception of empathy and vulnerability. And that’s ultimately what makes us likeable, which is the precursor to trust. When others trust us, they’re more willing to share what they know as well those whom they know. All of this – more contacts – opens the door for luck to enter.

These three attitudes draw others to us and encourage them to become our friends, advisors or sponsors. And that’s the quintessential source of increasing the odds of good fortune in our favour. The suggestions, counsel and proposals offered by a broader range of people, odd as they may initially seem, are the grist of luck. Relationships are the root cause of all value exchanges: they broaden the possibilities for success by enabling us to connect with a wider community of interest. Doing a few more generous and reciprocal things for others and saying thank you more often can be the wellspring of greater fortune.

If you’d like to delve further into this topic, there are some interesting resources available that cite rather fascinating research. For example, studies suggest that good luck charms actually work (to a degree) because they boost one’s self-confidence to try new things (The Courage Quotient). Some claim there is a science to becoming lucky (How Luck Happens). And those with a creative mindset, who downplay the need for rational thinking but focus on the value of magical ideation are deemed to be more lucky (The 7 Laws of Magical Thinking). I’m not recommending these books, just providing more mental nourishment for those who believe in luck.

The basic formula for inviting good luck into our lives then is actually quite simple. It’s having the humility to be self-aware, the curiosity and the courage to ask the right questions, and the willingness to engage a broader network of interesting and helpful acquaintances. Above all else, it demands the belief that something better is usually attainable. The luckiest people in the world are those who develop and project these attitudes and who nurture and protect the relationships that are drawn to them.