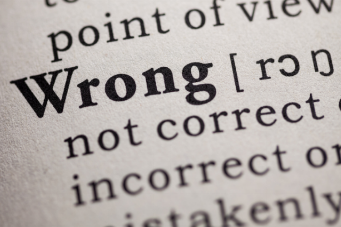 We all make mistakes. If we didn’t, we wouldn’t learn much. Failure produces resilience, resilience builds character and character is our destiny. We need adversity to find clarity and coherence in our lives – to discover who we are and what we can be. The challenge, of course, is that we don’t much like being wrong.

Our biggest mistakes often feel like good choices when we make them. Sometimes they do solve the problems we face but at the expense of making things worse down the line. The cure can be more vile than the poison; the examples are legendary. This invariably happens when our decisions are rushed or rash, thus foolhardy. Emotional responses are instantaneous. Careful reasoning, especially under duress, is rare.

The immediacy of the threats we face frequently masks the longer-term consequences. We focus more on what is highly dramatized or quickly imagined rather than on what is seemingly abstract or has unknown compounding effects. We worry about possibilities while ignoring probabilities. We fear the incidence of a terrorist attack more than contracting a debilitating disease (40 times more likely). We are incredibly poor at evaluating risks and random events – flying is 100 times safer than driving. We are more likely to die from being kicked by a donkey or drowning in our bathtubs than perishing in an airplane crash.

When something is terrifying and immediate, our emotions overwhelm our ability to stop and think. When anxious, we are primarily action-oriented; doing nothing is not considered a viable option. Deliberately evaluating the likely consequences can be so taxing that we prefer not to take the time needed for careful analysis of the pros and cons. It’s difficult, if not counterintuitive, to think two or three moves ahead. We are programmed to ignore evidence that contradicts what we already believe. We are impatient and hopeful rather than discerning, prudent and logical.

How do we counter the forces that lead to making really bad choices? For starters, never make an important decision when you are overly fatigued, highly stressed or inebriated. Never assume that complex problems require complex solutions. Life is complicated enough without having to make it even more so. Making things intelligible is the antidote to most of life’s problems.

Steve Jobs once said you’ve got to work hard to make things simple. It’s actually not that hard. The more we simplify our choices, the easier they become. We need to understand the laws of subtraction – to rid ourselves of unnecessary and onerous details that impair our capacity to focus on what’s essential and consequential. The seemingly insoluble dilemmas we face are often self-inflicted: the result of an inability to reduce a myriad of options to a few basic alternatives.

Look at the issue that troubles you from different angles. Don’t define it in solution terms – define it in terms of what’s preventing the solution from appearing obvious. They say a problem well defined is half solved, so try to state it in as many ways as you can. In my course, I call this upside-down thinking: isolate and identify the contributing factors or root causes before framing (in various contexts) the critical issue in need of resolution. Break the challenge down into its essential components, then recombine them in novel ways. As Picasso said, the act of creation begins with an act of destruction.

The answers to the vexatious challenges before us, as always, lie in taking a momentary pause to ask better questions. It’s the best way to find more viable solutions. The obstacles to being less wrong is knowing what questions to ask. Here are seven I suggest you consider when faced by difficult, risky or highly problematic choices:

1.  What would happen if I do nothing? This is the Charlie Brown school of reasoning. A lot of messy situations tend to clean themselves up when left alone for awhile (which is why I frequently advise clients to “just let it marinate.”) Our adrenaline and sophistication biases get in the way of this counter-intuitive thought process. They interfere with our ability to make better decisions. The cost of being wrong is usually less than the cost of doing nothing.

2.  What is the worst case scenario – what could go wrong if I choose this path? When evaluating what we think is our best course of action, we tend to minimize the costs and exaggerate the benefits. (When assessing what we dislike, we do the opposite.)

3.  What is the probability of my hoped-for outcome actually happening? Put another way: Am I being overly optimistic or unduly pessimistic in my planning? Do I have the necessary skills, resources, supports and the time required to pull this off? Empirical data is more instructive than emotional reasoning. For example, 90% of companies seek growth by acquisition but over 80% of such mergers fail. There is perception and there is reality – always vet your big decisions against the reality.

4.  Have credible alternatives or options been considered? All information has an expiry date – it eventually becomes obsolete or irrelevant. Some ideas are supported by fact; others are just sheer speculation or a reflection of the fad du jour.

5.  Is it possible that my choice might deliver an opposite or unexpected result of what I seek? This is the George Kostanza theory of decision making – when in doubt do the opposite. Don’t laugh … just think about it.

6.  Have I sought a good second opinion from a reputable, independent source? Frequently those telling us what we “should” do are overly attached to their recommendations or heavily influenced by their own optimistic aspirations. The first rule of decision making is this: no agreement without prior dissent.

7.  Is my decision reversible? Some choices are irrevocable and some can be altered after the fact. We often spend too much time worrying about the latter and too little thinking about the former. The key to our motivation and eventual success is making meaningful progress. When bad decisions can’t be undone, we must live with the consequences of being wrong.

No one is right all the time. But these seven questions will increase your batting average and lessen the possibility of failure. The questions aren’t infallible but the process of asking them before you decide what to do certainly is.