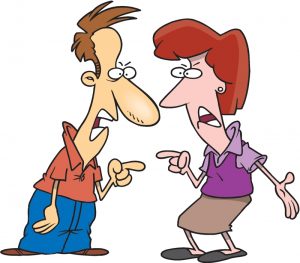 A good debate liberates our thinking. A robust but respectful exchange of views is an act of kindness – one that opens and sharpens our minds and gets us closer to the truth. It ought not be a winner-take-all contest where the primary objective is to prove one is wrong and the other right. Civilized discourse isn’t a measurement of who’s smarter; it’s an opportunity to test and exchange theories about life’s inordinate mysteries and complexities.

An unproductive argument is emotionally, not rationally, driven. It originates in the self-induced conviction we’re invariably correct about the beliefs we hold. This is the essence of confirmation bias – an affliction that forces us to both search for and protect that which affirms what we already know. It’s a consequence of thinking that what we perceive is fact rather than simply a unique interpretation of what we observe or hear and what we want others to believe.

Disrespectful communication stifles and destroys relationships. It increases frustration, anger and annoyance rather than enlightening and informing us. It entrenches wrongheaded ideas, fosters illogical fallacies and insults our basic intelligence. These types of viewpoint exchanges arise from either poor or insufficient research, an ignorance or abhorrence of science, and an intolerance of contrarian beliefs.

The key to eliminating them in our lives is to refuse to engage in arguments that lead nowhere, other than in circles. This usually happens when the debate is about irrelevant, nonsensical or inconsequential topics. And it’s a waste of time and intellect – Einstein’s definition of insanity comes to mind. The objective of disagreement should always be to enhance understanding. As Stephen Covey sagely advised, the focus of our efforts to encourage meaningful dialogue is to understand before we can be understood.

I tend to think most of us were born with an anti-persuasion gene in our DNA. When we feel under attack, our guard instinctively goes up. We have a basic need to be free from oppression, so we seek autonomy in our thoughts and behaviours. We want the right to choose our course of action rather than having one imposed upon us. This is why we shouldn’t tell people what we think they should do. (Note I just did.) Just ask them what they might do under the circumstances. We secure greater buy-in to our ideas when we allow others the latitude to reach their own conclusions.

Telling a teenager that junk food is not good for him, for example, won’t encourage a change in his behaviour. But asking him whether he thinks junk food is nutritious just might. Never underestimate the intellect of others. People aren’t necessarily stupid; they just act that way sometimes. Telling jurors to disregard evidence actually makes them weigh it more heavily. Telling someone not to do something often makes them more likely to do it. Telling increases resistance; asking opens the mind to possibilities. The skill of influence is letting others persuade themselves. This saves a lot of time and angst.

Never mimic premeditated idiocy. Don’t dilute your key proposition by adding or exaggerating extraneous or (worse) absurd thoughts in an effort to overwhelm them. It’s not the quantity of evidence that wins an argument; it’s the quality. All you do is defeat yourself by making your point that much easier to refute. And just because your opposer has no response to your uncanny or unconventional assertions doesn’t mean you’ve succeeded in convincing them. They just haven’t yet figured out an equally bizarre response.

Beware falling victim to the authority bias. Using third-party quotes effectively is an art form but using the sayings of others in an effort to persuade frequently means they are taken out of the appropriate context. In bad arguments, they are rarely germane to the substance of the disagreement. Should this tactic be used against you, a good response might be to say “I hear that, but I want to know what you think.” A good offense is often playing good defense.

It’s hard, if not impossible, to counter vague generalizations – there are just too many elusive places to hide behind. Like the words used in horoscopes and fortune cookies, they’re vacuous and without meaning. Always insist on specifics or unassailable data. Call out (label) the liberal use of jargon or imprecise terms. When they say “you just don’t understand what I’m trying to tell you,” ask them to rephrase their position in words you can understand. An inability to simplify suggests a lack of depth in their knowledge, one you ought to ignore rather than energize. Remember: the objective is not to win unproductive debates; it’s to avoid them.

Bad arguments are fueled by a lack of common sense and a desire to prove someone else wrong. They attack the arguer rather than the thesis of the argument. They incite those who fear adverse but implausible consequences. They appeal to ignorance and hard-wired biases, beg the question, selectively cull data, use false dichotomies, half truths and weasel words. All of these timeless rhetorical tricks entrap the gullible.

Never argue with politicians – whether elected or self-anointed. They’re either well trained or predisposed to answer questions without saying anything you could ever disagree with. Never chase an argument; let it come to you. And never engage in nonsensical or irrefutable premises; the onus is not on you to prove or disprove what cannot be seen (like ghosts or religious parables), measured or contradicted. Unless you choose to play games and, for whatever reason, find pleasure in senseless and uninformed exchanges.

In whatever difference of opinion you determine is worthy of your time and effort, end it with gratitude. Accept defeat or victory gracefully, admit you’re wrong when you are, and tell them what you learned from the exchange. Try to summarize their views but never repeat yours. You’ve already had your say. As challenging as this may seem, it serves a higher purpose. It enriches relationships (assuming you seek that) and adds to your reputation as a fair, empathic, open-minded individual. This ending makes you an interesting person to know and that, I assure you, will deliver spectacular dividends in the future.